Mr. AWESOME Gets His Stooges Mixed Up 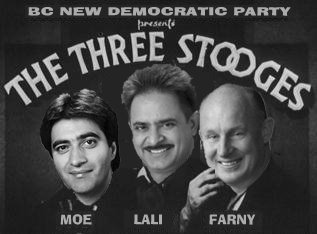 Well, well, well. AWESOME Brian has this knack for getting his stooges mixed up. Now, on the face of it, there is nothing wrong with that. As BC's "King of the Bloggers", Alex Tsakumis, once cogently stated about good old Brian:

Now is that tough love or what? BC's pre-eminent media broadcasters/scribes include the following:

3. Keith Baldrey (Global BC)
- 27 years reporting on BC political scene

Any rational individual, with AWESOME Brian's apparent disparaging remarks about these three gentlemen, would obviously just tune these guys out. But not our AWESOME Brian. That's because good old Brian secretly respects these guys. What does it all boil down to? More Brian Brain Farts™. In fact, the stench of Brian's Brain Farts™ rekindles memories of Lynyrd Skynyrd's little ditty: "Ooh, ooh that smell - Can't you smell that smell?"

Stay tuned for another episode of ..... Brian Gough and the Straight Goods are AWESOME!
Posted by Herman Munster at 3:11 PM